When asked to imagine deadly animals, it is easy to conjure images of large predators and sharp teeth. But the deadliest animals are actually much smaller.

Vector pests, such as mosquitoes and ticks, are way up on the list due their ability to vector disease. Mosquitoes hold the world title, namely due to malaria. However, malaria is a much smaller problem in the United States.

With the ability to vector diseases such as Lyme disease and Rocky Mountain spotted fever, the tick can be considered the most dangerous arthropod in the United States. 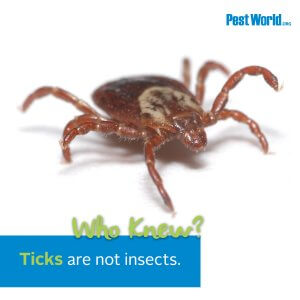 Ticks are in the arachnid family, making them more closely related to spiders and mites. Insects are commonly defined by having one pair of antennae, three body segments, and six legs.

Ticks do not have antennae and have two body segments instead of three. One of the easiest ways to distinguish ticks from insects is to count the legs. Adult and nymph ticks have eight legs, while insects have six legs. Tick larvae throw that rule out the window by only having six legs but can still be distinguished from insects by examining the body segments.

Where do ticks live?

Ticks are commonly found in tall grasses, woody/brushy areas, and leaf litter. What else can be found in these areas? Rodents and other animals. All ticks feed on blood from vertebrate hosts. Mice are a good example of an extremely common host (especially for tick larvae).

Ticks cannot fly or jump, so will not wander too far away from areas their hosts may be found. They wait for their host to pass by them and grasp on, a process called questing. If you find a tick well outside their typical harborage, there is a good chance that it hitched a ride from its host.

Whenever spending time in tick hot spots, take care to wear long sleeves and pants. Check yourself for ticks prior to going indoors. If you do find a tick, be sure to remove it promptly.

Prevention is the preferred route for ongoing tick management. Take control of tick infestations by understanding where ticks are commonly found, then modify those areas to make them less appealing to ticks and their hosts.

Be familiar with tick species and their preferred hosts in your area to better target your approach. If pesticides are used, opt for products with good residual such as Onslaught FastCap or OneGuard. Also consider including an insect growth regulator, such as NyGuard.

Apply these products where ticks may harbor or frequent. Perform a follow up inspection 1-2 weeks following treatment and reapply as appropriate. 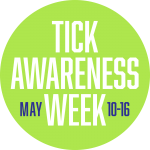 This May 10-16, MGK is partnering with the National Pest Management Association (NPMA) to help educate consumers about the health threats posed by ticks during the inaugural Tick Awareness Week, an observance recognized by Chase’s Calendar of Events. Visit PestWorld.org to learn more.

Anna Hansen is a technical service support specialist at MGK. She received her bachelor’s at Concordia College in Moorhead where she majored in biology and German. She graduated with her Master’s in entomology at the University of Minnesota. After graduating, she worked in the pest control industry as both a technician and QA/training coordinator. When she is not working, she enjoys reading, gardening, and baking.