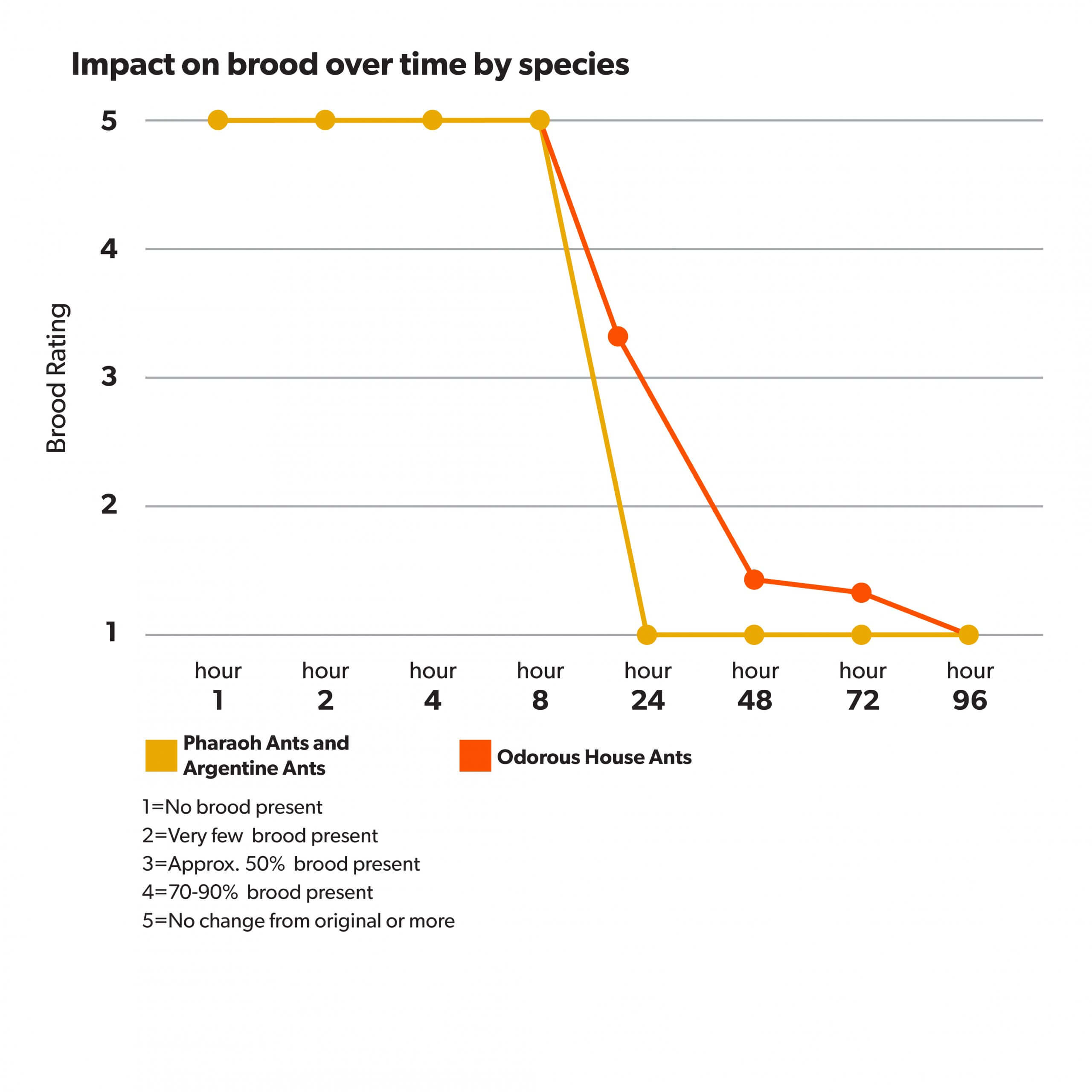 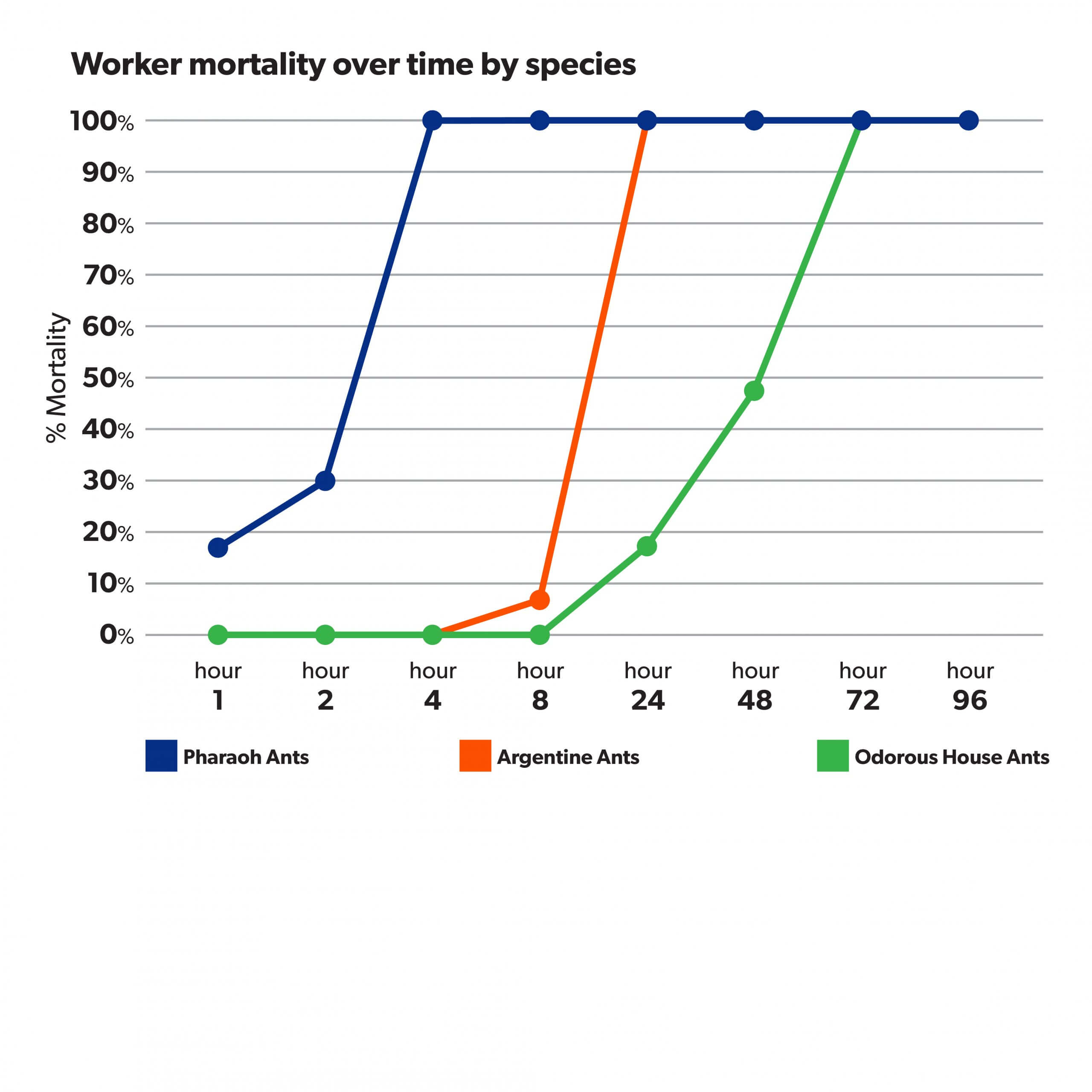 These charts demonstrate the complete efficacy of Sumari® on both the workers and brood of several important structural pest ant species. As is shown, this formulation impacts both the current and future generation of the colony, leading to highly effective control.

Impact on Brood Over Time

This study on colony fragments was initiated with a pre-determined volume of brood comprised of eggs, larvae and pupae. At onset of the study, the colony was assigned a brood rating of “5”. If an active has no impact on the brood, the rating will remain “5”, whereas various levels of negative impact on brood quantity will score as “4-1”, with “1” showing the highest brood impact. This graph demonstrates Sumari®’s ability to eradicate brood of even the toughest to control pest ant species within four days, and often as quickly as 24 hours after application.

Worker ants supporting test colony fragments located on treated surfaces were observed for up to four days post-treatment. Results obtained on these three structural pest species indicate onset of mortality within hours of exposure, while efficacy being slow enough for the contaminated workers to return to the colony and contaminate non-foraging nestmates, brood and queen(s). Active foragers from all three species were eliminated within three days post-treatment.

These protocols are designed to help you stay in control of ants. They include habits and background, identification, hot spots, inspection, customer communication, treatment and ant control product information.

Download this supplemental guide loaded with helpful information on ants, as well as identification, inspection and treatment practices as well as helpful tips and tricks:

See examples of equipment that may be used to apply Sumari® Insecticide to poultry facilities:

Sumari® Insecticide is the latest in ant control innovation. See features and benefits in our product overview video:

Is Sumari® repellent or non-repellent?

Sumari® is a non-repellent product that works great on social and communal insects like ants and cockroaches.

How does Sumari® work?

Sumari® works on both the nervous system and endocrine system (hormones) of target insects.

How long does Sumari® last?

Even outdoors! MGK conducted third party trials testing the longevity of Sumari® on tile and concrete under real-world conditions.

Where can I apply Sumari®?

What kind of protective equipment do I have to wear when applying Sumari®?

Applicators are only required to wear long-sleeved shirts, pants, socks and shoes. No gloves, goggles, or respirator required!

How quickly will I see results with Sumari®?

Each individual account is different but Sumari® users report control within 24–72 hours in most cases. This includes Argentine and red imported fire ants.

Does Sumari® work on other pests besides ants?

Where should I apply Sumari® for fly control?

Sumari® Insecticide has been proven to be an effective tool for house flies in both indoor and outdoor locations. Additionally, the use of Sumari® Insecticide on both porous substrates, like soil, and non-porous surfaces, like metal, yields equally successful results. It is recommended that Sumari® Insecticide be applied anywhere that house flies are resting and breeding, such as barn walls, manure stacking pads, flush pits and other areas inside and outside animal production facilities.

How does a liquid insecticide application differ from a granular product for fire ant control?

Granular ant baits have long been relied upon for fire ant control due to their ease of application over large areas. However, rain events and incidental irrigation can limit their ability to work. Sumari® Insecticide is stable in the environment, allowing ants to forage among the active ingredients without fear of weather restrictions. Applications of liquid insecticides are great choices when a concentrated formulation is desired, while granular applications may be a better choice for large-scale pasture applications.

Why should I use Sumari® for ant control over other products and methods?

Ants are social insects and unlike other pests common to animal production, the success of an ant control program relies on the ant’s ability to share the insecticide with the colony. Sumari® Insecticide is comprised of clothianidin, a non-repellant insecticide and pyriproxyfen, an insect growth regulator (IGR). Repellant insecticides, such as pyrethroids, can act too quickly for the insecticide to be shared by foraging ants with the rest of the colony or drive ants away from the treatment area before having time to work. Sumari® Insecticide gradually works on ants, allowing them to share with the colony before perishing.

How does Sumari® fit into an insecticide rotation at my animal production facility?

Pyrethroid products are often used for premise applications and control of a broad spectrum of pests. Sumari® Insecticide is an ideal rotational product for those facilities that have previously limited their applications to a single insecticide class. Sumari®Insecticide is a neonicotinoid plus an insect growth regulator. Together, they provide residual control of listed insects even in pyrethroid-resistant populations.

Why is there an IGR in Sumari®?

Insect growth regulators (IGRs) provide another level of insect control by working to break the reproduction cycle and prevent insects from reaching adulthood. By including an IGR in Sumari®, the need to tank mix an additional product is eliminated. Many products on the market provide a quick kill, but Sumari® makes applications quicker and easier by including the IGR in solution.

What if it rains after I apply Sumari®?

Applying Sumari® when the weather is calm and there is no rain forecasted for 24 hours will ensure the best residual control similar to all insecticides. However, the active ingredients in Sumari® are known to resist flushing once applied and provide results, even in adverse conditions.