Love is in the air! Or at least that is what the aisles at the grocery store and ads on my TV say.

In honor of Valentine’s Day, we thought it would be fun to take a look at the day with an entomological lens.

Whatever you have planned this Valentine’s Day, celebrate by sharing these fun bug facts.

Crowned as the unofficial mascot of Valentine’s Day, lovebugs are a household name in the southern United States. Lovebugs are not ‘true’ bugs but rather flies that plague the hoods of cars in the warm spring and late summer seasons.

They are charmingly named Lovebugs for the way the male and female will join together by their abdomens and drift slowly through the air. Reminds you of a sweet walk through the park, right?

A close second in the mascot race, kissing bugs are slightly less cute than lovebugs. Kissing Bugs are true bugs, but unlike the harmless lovebugs, they are vectors of disease-causing pathogens.

Chagas disease is caused by a parasite carried by kissing bugs. That parasite is transmitted when the infected kissing bug defecates near an open wound, often the bite wound they just made while taking a blood meal, and the feces is rubbed into the wound. This already sounds like a complicated relationship! 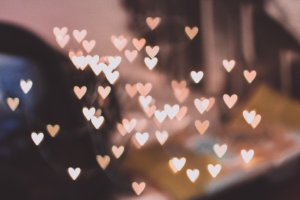 It wouldn’t be Valentine’s Day without hearts! Insects and humans are both animals, but that’s where a lot of our differences with insects begin.

Insects do have hearts that pump hemolymph – an insect’s version of blood – but they are located on the dorsal side (back) of their bodies as opposed to the ventrally-positioned (front) human heart. That kind of information makes my heart skip a beat!

Why spend a pile of cash on flowers from a florist when you can pick some from your neighbor’s garden? Not recommended if you’re a human, but bees and other important pollinators rarely discriminate where their pollen comes from.

In fact, the loving act of pollination by bees and other insects contributes $20-30 billion to annual agricultural production in the United States. That doesn’t stink at all!

As Valentine’s Day approaches, you may have dinner plans in the works. Take notes from the scorpionflies and skip the fancy prep work. Male scorpionflies present dead insects, dripping with saliva, to females before mating.

The ability to produce a slobbery sauce for supper is what seals the deal for the female scorpionfly. Talk about sweet and savory. 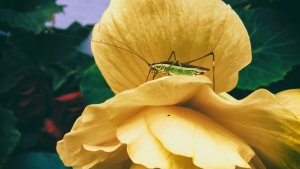 Of course, we can’t forget the music to set the romantic mood! You could go for jazz, or maybe strings, but there’s nothing like the smooth serenade produced by crickets.

Officially called stridulation, male crickets will rub their wings together to produce auditory signals to attract a mate. Love songs have always been my favorite.

Maybe you have a gift picked out for your sweetie, or maybe you are a last-minute shopper. Take note from the insects who partake in nuptial gifts. Generally, this a food item that the male provides to the female insect and it is intended to woo her.

I’m not going to tell you not to buy jewelry on Valentine’s Day, but there’s a reason candy and chocolate have a dedicated aisle!

If your goal this Valentine’s Day is to find “The One”, take notes from termites, Bess beetles, and several species of bees and wasps. An insect’s goal in life is to reproduce – it’s one of the reasons they are so successful.

But monogamy is not something we see very often in insects, so it’s special to note those who have biologically chosen “to have and to hold until death do they part”. I love weddings!

Whatever you have planned this Valentine’s Day, you can celebrate knowing you are now equipped with some fun bug facts to share with your sweetie.

Cassie Krejci, Ph.D. is the Animal Health Technical Field Specialist at MGK Insect Control Solutions. Cassie holds a Ph.D and B.S. in entomology from Texas A&M University, and a M.S. in Agriculture from Tarleton State University. Cassie has been with MGK since May 2018 and resides in College Station, Texas. Cassie provides support to those in the poultry, swine, cattle, and equine industries through technical advice, insect management protocols, and field-based research.